In 2014 The “1st Girls Cadet College” in Pakistan was started where the students from all over Pakistan and other countries are getting education and training.

Several Joint Forces officers had visited the Cadet College Jhang as a chief guest on several ceremonies held in the college.
Since around 7 years Cadet College Jhang has become a trademark institute for the development of raw mind to become successful leaders as officers in Pakistan Armed Forces and other national & international organizations. 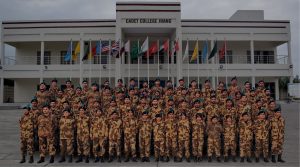